Sunspots emerge in groups, and their configuration varies in complexity (as you can see when you click through a few classifications). But, what does complexity really mean? 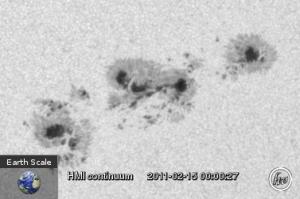 A visible light image of a particularly active sunspot group (this one was responsible for the 2011 Valentine’s Day Event).

Allow me to start where many of my research projects start- Wikipedia 🙂 -which defines complexity as follows:

In our case, something = a sunspot group, parts = sunspots, phenomena = eruptions emerging from a group of sunspots… and so on. Since we are using magnetograms to study sunspot groups, we define the ‘parts’ as regions of a given polarity (positive/white or negative/black) within a given sunspot group. Thus, to describe a sunspot group as simple (the opposite of complex), we consider whether a straight line could be drawn, so that all the white areas of the image are on one side and black on the other.

Panel A in the above image shows a simple ‘bipolar’, with basically one area of white and one of black (an even more simple configuration would be all white or all black). A more complex region, like the one shown in the panel B, would require a more curvy (possibly more than a single line) to divide the image into white and black regions. An image of countless white and black spots (like that shown in the rightmost panel) appears to be random (like noise), and thus simple. So, true complexity lies between the two extremes of being uniformly white/black and being composed of random speckles of white and black. Unfortunately, computers have a hard time finding that sweet spot of true complexity, but humans can spot it quite easily– looks like 3.5 billion years of evolution for the human brain was worth the wait!

There is currently a sunspot group ‘classification’ system which is used as a ‘proxy’ or place-holder for complexity, since the real thing hasn’t been measured yet. Experts at observatories around the world sort images of sunspot groups into several classes. The most simple class is ‘alpha’: one polarity of magnetic field (bottom-left panel.). Slightly more complex is ‘beta’: two polarities, or bipolar. A classification of ‘gamma’ is more complex, and indicates that the polarities are mixed together (i.e., essentially that a single, fairly straight line cannot divide the regions of white and black). There are other variations of these basic classifications, that are part of the ‘Hale’ or ‘Mt. Wilson’ classification scheme. The Hale scheme relies on both magnetograms and visible light images of sunspot groups.

Another widely used scheme is called the McIntosh system The drawback to using these schemes for indicating complexity is that there are only a few broad classes and it is not entirely clear how these classes should be ordered in terms of complexity. On the other hard, we want a continuous measure of complexity, like a scale from 1-100, with arbitrary precision; basically a meter stick for sunspot group complexity.

Lots of previous work (Abramenko 2005; McAteer et al. 2005; Ireland et al. 2008; Conlon et al. 2008; Hewett et al. 2008) has sought to design an algorithm that could indicate the complexity of a sunspot group. A common method utilises the concept of ‘fractals’. The fractal dimension of a 2D object can range between 1 (a line) and 2 (a square). It has been found sunspot groups with certain fractal dimensions are somewhat more likely to produce flares. More recently, Georgoulis (2012) has shown that the association is marginal at best. Moreover, fractality is incredibly hard to interpret physically.

Other proxies for complexity consider the magnetic connectivity between different areas within a sunspot group (Georgoulis & Rust 2007; Ahmed et al. 2010). Properties based on connectivity scale much better with sunspot group flaring than fractal dimension. However, the relationship between these properties and ‘complexity’ is not clear. Also, these properties cannot be accurately determined away from the center of the observed solar disk, due to foreshortening (since the Sun is a sphere, the sunspot groups get squashed at the edges).

This plot shows the Hale class of a large sample of sunspot groups (colored symbols), the size of each group (horizontal, X-axis) and the magnitude of the largest solar flare produced by each group (vertical, Y-axis). The point is that larger and more complex sunspot groups produce larger flares, which is very important in solar flare prediction, and supports our motivation for running Sunspotter.

By the way, you may enjoy some interesting TED talks related to the idea of complexity that put this abstract concept into a more practical light:

Complexity is difficult to put into words. If you have an ideas about complexity you would like to share, lets discuss it on Talk or the comments section below!

About Dr. Paul A. Higgins

I am a postdoctoral research fellow in the Astrophysics Research Group at Trinity College Dublin in Ireland. Currently I am a visiting researcher at LMSAL in Palo Alto, CA. I am investigating the causes of solar eruptions. To do this I use image processing and data mining techniques to study the evolution of sunspot groups as they are born, cross the solar disk, producing flares and coronal mass ejections, and then quietly decay and fade away.
View all posts by Dr. Paul A. Higgins »
« Previous post
Next post »