Basics of a Solar Flare Forecast

In a previous post I described the concept of space weather. Whilst monitoring current conditions around Earth, space weather forecasters will produce forecasts of the likelihood of solar eruptions occurring over the next few days. Solar flare forecasts are just one part of these daily guidance documents. To create a forecast, a few simple guidelines are generally followed, which I will outline in this post.

For any forecast, be it Earth weather or space weather, the forecaster needs to begin by describing what is happening now. They start by examining solar imagery, such as the MDI magnetograms used in Sunspotter. They will identify any features in these magnetograms which are already having, or are likely to have, an impact on space weather conditions in the coming days. See Figure 1 for an example of identifying active regions using magnetograms. In this particular example, regions have been numbered according to the NOAA Space Weather Prediction Centre sunspot numbering scheme – when a new region emerges onto the solar disk it is given a number in order. The Solar Monitor Active Region Tracker method outlined in a previous post is another way to identify regions of interest, which automatically produced the data sets you see in Sunspotter. 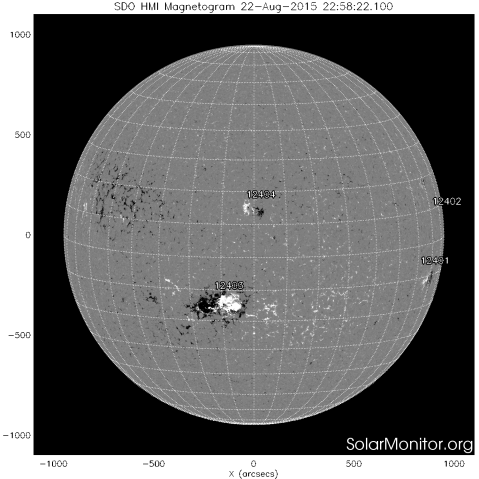 Figure 1: SDO/HMI magnetogram from 2015 August 22. NOAA active region 12403 might be of particular interest to a forecaster, with a ‘beta-gamma-delta’ classification. Figure source: solarmonitor.org

The forecaster will examine the history of these identified regions of interest– if something significant has happened recently this might get described in the guidance document, perhaps with images to help the viewer understand what happened and why.

2. What’s likely to happen (the forecast)?

Once the current situation has been described, it is time to move on to what is likely to happen over the period of the forecast. This can be separated into two parts:

The forecaster will describe in the guidance document how any identified regions are likely to move or develop in the immediate future. For example is a sunspot region growing? Is it complex? Is it likely to produce flares? This is where your classifications in Sunspotter will help define how complex a region is! Once forecasters have decided on a classification, they will calculate the probability of a flare occurring in this region over the next 24 hours.

There are many ways to do this, including Bayesian methods (e.g., Wheatland et al), machine learning (e.g, Qahwaji et al), discriminant analysis (e.g., Barnes et al), and many more. A relatively simple statistical method is often used in operational flare forecasting, which starts with a large database of flare information from previous solar cycles. This database shows how many particular classes of flares each classification of active region produced in that time period. From this an average flare rate can be calculated, and using Poisson statistics a percentage probability of flare occurrence for the next 24 hours will be obtained for each region. See Bloomfield et al, 2012 for a more in-depth description of this method. A little human intervention is also involved here – if a forecaster thinks the value is too small or too big they can change it based on their experience! The percentages for each region can then be added to obtain the probability of a flare occurring across the entire solar disk over the next 24 hours.

2.2 The rest of the forecast period.

The forecaster will then take a briefer look at the whole sun over the next few days. If the next 24 hours look fairly quiet, but something interesting is expected to return to the solar disk in a couple of days time, then the probability of a flare occurring might be increased later on in the forecast period. Similarly if a particularly complex region is due to leave the disk in a few days, the probability might be decreased for that day. An example of a typical flare forecast is shown in Figure 2.

Figure 2: Example of a solar flare forecast for the next four days. Percentage probabilities are calculated for two ‘levels’ that are related to M- and X- class flares. These are the two largest classes of solar flare, the ones most likely to produce radio blackouts. The forecast also mentions whether any M- or X- class flares occurred over the previous day, and a general description of current conditions. Figure source: Met Office (Crown Copyright)

Once the forecaster has described what we expect to happen on the Sun, next it’s time to explain how this may affect life on (or in the vicinity of) Earth. For example can we expect radio blackouts? Do astronauts onboard the International Space Station need to postpone any space walks? This will be summarised as part of more general guidance documents, which include forecasts of other space weather phenomena such as coronal mass ejections.

These are the typical steps taken to create a flare forecast. However every day is different, and forecasters can diverge from this method if necessary! Check out current space weather conditions on, e.g., the SWPC and Met Office webpages.

Thanks to Senior Operational Meteorologist, Mark Sidaway, for his guidance when creating this blog post. All statements in this post are my own and not those of the Met Office.

I am a space weather research scientist at the Met Office*, the national meteorological service for the United Kingdom. My job is to transition basic research to operational forecasting- in other words, I try to improve space-weather forecasts with new-and-improved science!

What do I mean by space weather? It basically describes the changing environmental conditions in near-Earth space. Magnetic fields, radiation, particles, and matter, which have been ejected from the Sun, can interact with the Earth’s upper atmosphere and surrounding magnetic field to produce a variety of effects.

There are streams of particles from the Sun constantly hitting the Earth via the solar wind, but the Earth experiences an increased impact during periods of high solar activity, when solar eruptions can occur in the form of solar flares and coronal mass ejections (CMEs). Solar flares are sudden releases of energy across the entire electromagnetic spectrum. They are hard to predict, and the energy can be detected in the Earth’s atmosphere as soon as 8.5 minutes after a solar flare (travelling at the speed of light). CMEs are often associated with flares, eruptions of large amounts of matter from the solar atmosphere. These can take days to reach Earth, carrying a local magnetic field from the Sun. Considering the short time frame for forecasting of flares compared to CMEs, it’s really important to have accurate alerts for big events. That’s where your help with Sunspotter comes in – by improving our understanding of the active regions that are the source of flares, we can hopefully improve our forecasts! 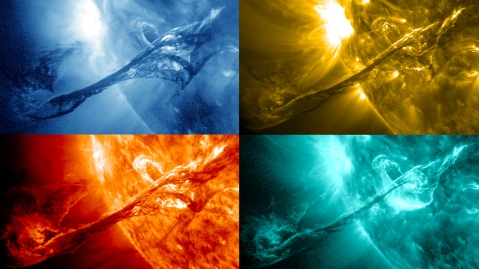 But why do we care about space weather? In our increasingly technologically-dependent society, the impact of solar eruptive events can actually be quite severe. Some key sectors in need of accurate event forecasts include energy, aviation, satellite operation, marine, communications, rail, and defence. For example, interruptions to radio communications and GPS can occur due to eruptions, and power grids can also be disrupted. Particles accelerated during eruptions can also damage spacecraft and degrade electronics, and instruments often have to be switched-off or reset. It is important for satellite companies to receive accurate information on the likelihood of eruptions to ensure as little down-time as possible. In the aviation industry, flight crews, passengers, and onboard electronics are all under direct exposure to higher levels of radiation on transpolar flights. Even astronauts cannot take space walks during these events. Solar-activity monitoring systems are imperative to keep astronauts safe!

Space weather has several effects on near-Earth space; the most recognisable might be the aurorae at high latitudes. Large solar eruptions can cause aurorae to form in even lower latitudes, as far south as the equator in very strong events. This image shows the aurora australis captured by NASA’s IMAGE satellite [Credit: NASA].

There have been a number of events directly related to high solar activity in recent years. For example, during a particularly large event in 1989, the entire power grid of Quebec collapsed, causing a 9-hour blackout which effected 6million people. In December 2006, a powerful flare disrupted satellite-to-ground communications and GPS navigation system signals for about 10 minutes. The eruption was so powerful it actually damaged the solar X-ray imager instrument on the GOES 13 satellite that was taking images of it! An American telecommunications satellite, Galaxy 15, now widely known as ‘zombiesat’, ceased responding to commands in 2010. The manufacturer has theorised that solar activity was responsible for the satellite malfunctioning, although they could not settle on a single root cause. Check out the National Research Council or the Royal Academy of Engineering reports for more information on, and examples of, space weather impacts.

In order to monitor and forecast space weather, we generally use ground-based and satellite instrumentation. The solar surface and atmosphere is observed in near-real time to detect any new active regions that may become the source of large events. These observations, such as the MDI images used in Sunspotter, can help determine whether an eruption may be a threat if it is Earth-directed. The Earth’s atmosphere is also monitored to detect changes related to solar wind variations, as well as short-term impacts of solar eruptions. Ongoing scientific research is crucial to determine the fundamental physical processes involved in driving space weather, such as solar magnetic fields. The more that is known about these processes, the more models can be improved to accurately predict when a flare or eruption will occur. So keep clicking those active regions and help improve our warning systems!

*Disclaimer: all statements in this post are my own, and not those of the Met Office.